How to Stop Overeating Once and For All 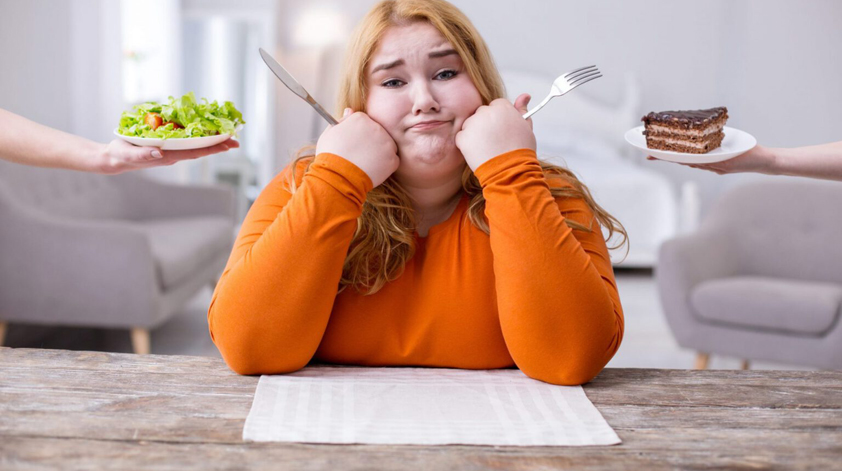 You had one too many drinks last Saturday evening because it’s the weekend anyway! At dinner last night, your dessert craving for chocolate cake turned out to be a binge – one tempting slice after another.

And today,  you stuffed yourself with five buttery rolls at the office potluck. You originally intended to have only two of the tasty rolls, but they were just too yummy to ignore.

We’ve all been there, and we all know how those post-binge episodes go — from guilt to frustration to promising yourself that it’s going to be the last! (Not to mention the dreaded food coma…)

You thought you’ve overcome overeating for good, yet it turns out that you’re back to square one when it comes to getting your cravings under control.

Why is it so hard to break out of this cycle?

Is there a way to kick this ceaseless habit for good?

Does it have to do with self control and having an endless supply of willpower?

Or is there some otherworldly, mystical force that you need to tap on in order to break free from binge-eating episodes?

I’ll explain why it’s so tempting to finish a large box of pizza all by yourself and I’ll help you understand how to put an end to overeating.

With obesity affecting more than one-third of the UK adult population, getting out of the binge-diet cycle remains a puzzle to many.

To have a greater understanding as to how overeating happens, it makes sense to initially get a grasp of how our appetite, or the desire to eat, works.

It’s worth noting that appetite is a tad different from hunger. Think of hunger as a need to eat breakfast while appetite is more like a desire to eat that sliver of cake after lunch.

At a fundamental level, hunger and appetite are influenced by a network of pathways involving the neuroendocrine system. Appetite regulation, satiety, and energy balance involves the following:

your gut (it’s the largest endocrine organ in the body!)

a cocktail of hormones

In essence, energy-dense foods rich in fat and sugar were extremely desirable to our hunter-gatherer ancestors for survival because they were scarce. However, this instinct for fatty and sugary meals remains even though these types of food are now available 24/7.

In a nutshell, the more you gorge on food laced with too much fat and sugar, the more likely that you’re going to get addicted to it.

Another way of understanding appetite is to look at it from the perspective of eating for two main reasons— as a response to hunger (homeostatic) and for pleasure (hedonic).

In a review of studies differentiating the two, the researchers described that homeostatic hunger is the result of the prolonged absence of energy intake or food itself, while hedonic hunger is strongly influenced by the availability and palatability of food in your environment.

Why You Really Overeat And Binge

At first thought, it seems like putting an end to overeating is simply a matter of telling your brain to stop consuming food. Yet we all know that it’s not that easy, right?

Your brain may be the main driving force behind your appetite, but it’s not acting alone.

The frequency and the amount of food you eat is also influenced by a complex interaction of the following factors:

Your gut, hormones, and brain may be working together to control appetite, but your genetic makeup also has a say as if you’re the type to overindulge.

Environmental factors also contribute to the rise of appetite. These factors include the atmosphere of the room and the presence/absence of distractions during meals

Child feeding practices by parents during the first years of childhood tend to impact one’s eating behaviour later in life. A review of studies on the parental influence on eating behaviour revealed the following interesting findings:

Whether it’s stress or social pressure that’s driving you to overeat, we all know how frustrating it is to realize that you gave in to your cravings (again!). The good news is you can do something the next time you’re about to open your third bag of crisps.

What Should I do?

For a start, consider the following easy yet sustainable solutions to put an end to overeating, minus the horrible feeling of self-deprivation.  Learn to recognize the difference between homeostatic and hedonistic hunger.

As mentioned earlier, you can eat because you’re hungry but you can also eat for pleasure.

It can be a struggle to figure out the difference between the two because it requires you to be more mindful of your body. As a result, misinterpreting hunger and satiety signals can lead to overeating.

It can be challenging to recognize the true signs of hunger and satiety. While these cues will differ from one person to another (as well as depend on the time of day), you can learn to recognize your motivation for eating and adjust your eating habits by asking the following question:

Am I eating as a response to a physical cue (e.g. growling stomach, headache) or am I eating because I am feeling stressed, anxious, or overjoyed?

Whether you’re stressed about deadlines or fed up about your annual employee performance review, talking to a friend or journaling may be more helpful than eating your emotions away.

These are three examples of tiny adjustments you can make to your daily habits.

A lot of people can relate to overeating (because it happens to the best of us too!) but food addiction is a different story. If you feel that your binging episodes has turned into more than just a bad habit that you can change, seek professional help.